So You Want to Join the Backward Bigots? This is What It's Like (In France).

Well, then pretend you did notice.

We were on holidays where no internet was to be had, hence the quiet around here. But I had lots of ideas percolating in my brain in the meantime.

One of which was about being (trying to be) a faithful Catholic in this day and age, and especially how it compares to what I read about America on my favourite blogs.

Being a Christian in Europe is generally an extremely counter-cultural thing to do. It's not like America, politicians don't even pay lip-service to some vague deity. Being a Christian is an embarrassment as far as they are concerned.

So I figured I'd explain how it feels from the insider view, both in France and in England, and the challenges we face.

So, what is it like, being a Catholic in France? (In my limited experience, I did after all, live in England when I reverted).

Often, it is lonely. It's hard to find people who agree with your views, or are willing to consider them valid thoughts.


In France, Catholicism is still (just) the default religion for most people. There are a few Protestants, a few Jews, a growing number of Muslims, but culturally, it is a Catholic country (in name at least). Basically, if you are One of Them Bigots, people assume you are probably a Catholic bigot.

This means that you are not afforded the protection of a religious minority. Even though, really, you are. (If you are trying to follow some of the most controversial teachings of the Church, on marriage and contraception in particular, whilst believing in the Real Presence, you are a teeny tiny itsy bisty minute minoritette - that's smaller than a minority - basically, there are about three of you. On a good day. But I digress.) So, because you are perceived as a not-minority, you are fair game, in the way that Jews or Muslims are not (of course these groups also face discrimination, but it is more likely to be on a racist than a religious basis. I know, pick your poison.).

What I mean is that it's ok for people who consider themselves broad-minded (they have a Muslim friend) and liberal (they have a gay friend), who hold for tolerance and freedom and sunsets, to hate you.

Because Catholicism is perceived as a majority religion, people already KNOW it is a backward, women-hating, gay-hating, AIDS-propagating organisation of Evil. After all, they grew up with a Church in the background, celebrating Christmas and having chocolate eggs for Easter, they know all there is to know about Christianity. So they can dismiss you, and happily wait for you to recognise the errors of your ways, without ever actually listening to what you have to say. They will also be extremely violent in their rejection of you, since it is "allowed".

You also get to be marginalized by most other Catholics as an "Extrémiste".

There is still a large number of people who will be in the above situation, already KNOWING that the Church is wrong, but still coming to church some Sundays (although their numbers are dwindling), still being involved in the running of the parish, whilst openly saying that they are against its teachings. I am not saying it's altogether a bad thing that such people are staying (I may not flout the Church's teaching on marriage and contraception, but I do it in other ways, every day - yes, there is a difference, because I am not asking the Church to change its teaching to accommodate my selfishness/laziness/fallen-ness, but the point stands) yet it remains true that you are going to be marginalized even in church, unless you go with the flow on divorce, gay marriage, women priesthood etc.

On the other hand, the still Catholic-in-Name-ness of the country means you can get beautiful services and beautiful churches (in the parish where I grew up, the newest church was from the fifteenth century). And some of the major Holy Days are also holidays. So that's nice. And you won't have to go too far afield to find a church where they won't hold hands during the Our Father, and you won't stand out too much (pun intended) when kneeling down for consecration. (Apparently Vatican II did away with all the pomp and ceremony. So I am told.)

Also, the "Tradis" (holding for a 2000 year old Tradition instead of the fashionable opinions du jour) have been discriminated and bullied on and off for two hundred years, so they are pretty well-organised. The Benedict option is alive and well in France, you just have to go find the hotspots (Versailles is generally a good bet, a lot of the Catholic resistance was organised and led by the put-upon nobility during the Revolution, so some of the largest communities of Tradis are where there were lots of old families congregated).

Apart from such hotspots, there are some communities scattered about, generally gathering around a more orthodox priest. Typically, people will know which one is the "Tradi" parish, and avoid or join accordingly.

These groups are heavily stereotyped as royalists, wanting to return to nobility-run Ancien Régime, and refusing to welcome in anyone who does not agree with all the terms. I have no idea how true this is (I suspect not very) as I never stay long enough in France these days to actually get to know new people. 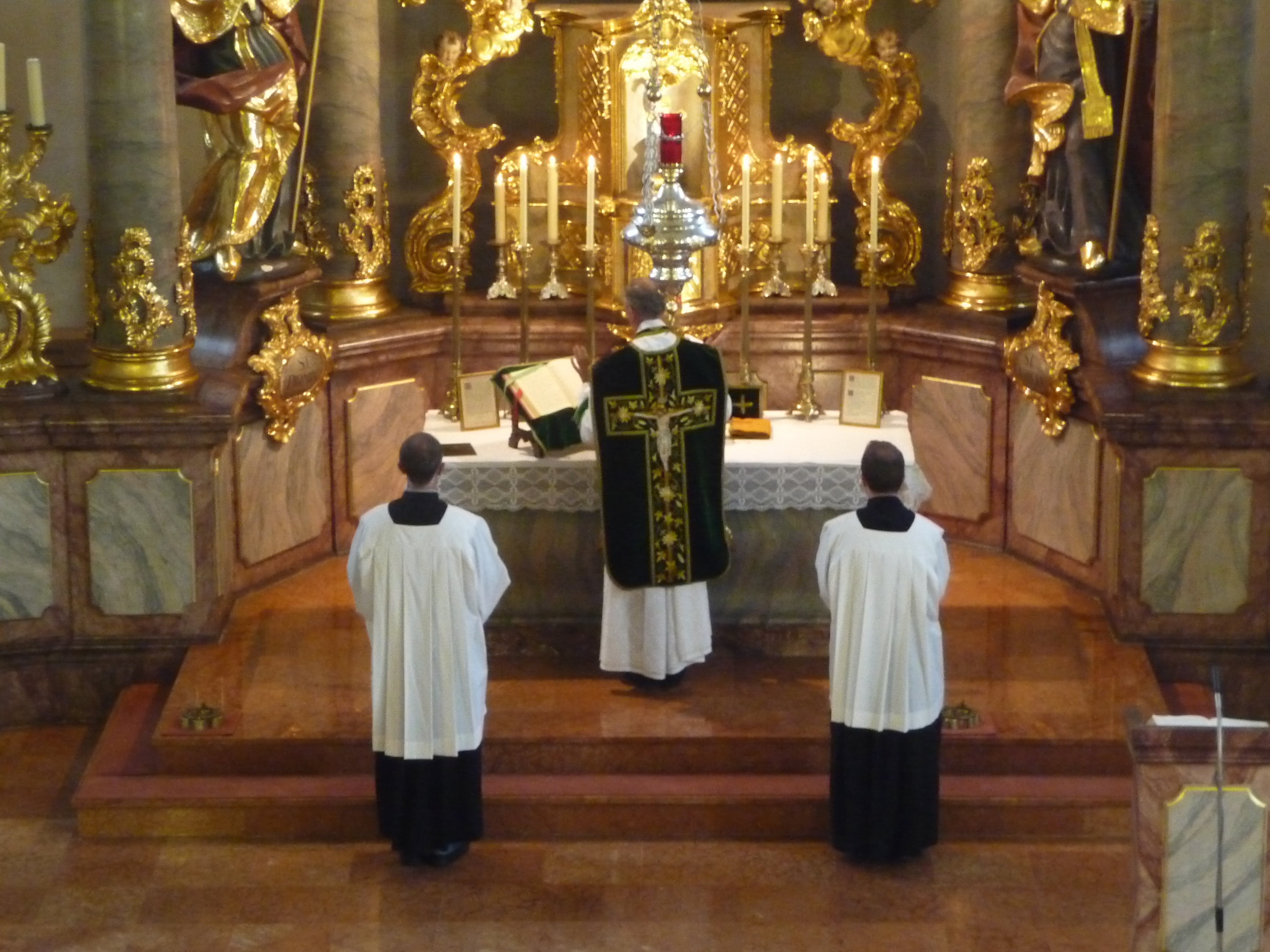 There are other groups of course, this is only the "Versaillais" stereotype, but they are harder to spot (you have to start talking to people you don't know, and other terrifying activities, to find them out). There are also some seemingly irreconcilable divisions between Extraordinary Rite/ Novum Ordo groups, which is a real shame, as we are already a minoritette.

Outside of the churches, France is an aggressively secular society (has been for a 150 years, one day I'll explain the history behind it, it's fascinating) - yes, with catholic holidays, because everybody agrees to more holidays - , and its laws don't allow for much religious freedom.


Many people have heard of the fact that in French public schools, it is forbidden to advertise your religious views, even by the way you dress. The idea is that everybody should agree to fit into the mold, and your conscience is your own private business.

There is no such thing as a conscience clause allowing you not to prescribe the Pill because it goes against your principles.

- On the other hand, people in France are much less likely to sue you over these matters, because they generally don't sue as easily as in America or England. So at least there's that. -

But good luck trying to get anyone interested in the conundrum you are facing! No-one cares much about the freedom of the employer, or the opinion of the tax-payer.

As far as a large portion of the public opinion is concerned, employers are part of this Evil Group of Evil, so their rights are not a popular thing to uphold (one of the most often-used chant in demonstrations - the national sport - roughly translates to "just take the money from the bosses" -"l'argent, il y en a / dans les caisses du patronat").


The fact that the free healthcare system is paid for by the taxes of people who may object to its practices has never been debated by anyone in my experience.

Education is also accepted as a State prerogative, and although homeschooling is legal, people are largely hostile to the idea of SAHMs which would enable it. People never question the fact that you are going to send your children to school or that the State should be in charge of its curriculum.


On a more positive note, it is considered extremely bad form for a teacher to share anything vaguely resembling political or religious ideas in a public school, and they typically don't do it, and avoid the difficult topics, like sex-education (as far as most teachers are concerned, it's not their job).

There is talk of introducing compulsory sex-education, but I am not sure how hotly debated it is, or if people will agree to it, or if teachers would do it, even if the law said so. In my experience, you learn about the reproductive systems as part of your biology classes around the age of 12-13 and that's it.


The private school system in France is slightly peculiar, as the best schools are typically state-run (it's a geography roulette) but even Catholic schools have to toe the line to a very large extent.

So, where does that leave you, member of the Backward Bigots Fraternity?

If you want to raise your children with a good understanding of the Church's teachings, you are going to have to do it yourself. The media will be against you, your children's schoolmates will be ignorant-to-hostile, your own parish will likely try to undo your work because the catechesis they offer is a dire blend of love-rainbow-butterflies, let's-skip-that-difficult-bit-here and you-don't-REALLY-have-to-do-it.

So, your options are:

Either to take refuge in one of the Tradis hotspots where other parents will be reinforcing what you are trying to teach and the parishes are likely to be run by these same people. You will be cut out from the world to a certain extent, but you won't be alone.

Or try to take on the whole world on your own and start gathering a community around you to help you do it. It is hard, but probably do-able, provided you know enough people with similar views, are sociable (I'm not) and can take a few differences of opinion (I'm working on it).

But, if you are a French Tradi, you probably already grew up in this environment and your family is supporting you. I am yet to meet another French revert from Lukewarm Pick-and-Choosism. (Hi! Want to be friends?)

Feel free to disagree in the comments if you have a different experience.

Tune in next time for the English experience!
Posted by Isabelle at 12:34