You know how I like history? (You don't? Hello, new reader! Do stay, but be warned, I do like history A LOT).

So, as a notorious history geek, I went and did a thing. To be perfectly exact, Simon did a lot of it. But I digress.

Patapon has now reached the age where he's talking up a storm, loving all the new words, doing adorable distortions which we only half-heartedly correct (except "avidoosh", we are never ever correcting avidoosh. He is going to university still thinking that is how you say "elephant". Don't you dare tell him otherwise!). It is fascinating to see him navigate the two languages, which he does remarkably well, and delighting in sounds.

"Tout Tourne", for example, is delightful ("Everything's spinning" for the non-francophones)


One thing he does not do however, is discriminate. As far as he is concerned, a word is a word. It is not high-brow, or impressive or vulgar. It's just a collection of sounds.

Enter the thing we did.

If any word is just a collection of sounds, then why teach him "Thomas the Tank Engine", just because it is meant to be child-friendly? Why not, I don't know, this one instead?

So we went ahead and printed a few historical characters,taped them to his shelves and taught him to recognise them. So far we have Elizabeth I, Bob Dylan, Karl Marx (Patapon's favourite), Louis XIV, Gandhi, The Beatles, Henry VIII, Pope Francis ("Pa-pi-fa"), Napoléon, Cardinal Richelieu, Caesar, Alexander the Great and Einstein. We discussed having Adolf Hitler, but the thought of our toddler having a picture of him in his room did give us pause, so we decided against it in the end. 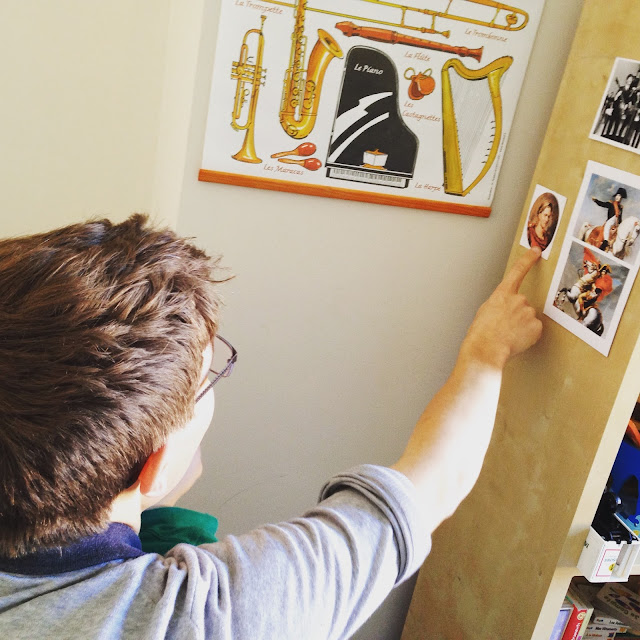 Now, before you start shouting at me because he is way too young for formal education, let me be clear: he LOVES it. Most of the time, he is the one who wants to play.

Secondly, we are under no illusion that this is in any way educational. Give it whatever spin you want, he simply doesn't know who these people are, even though he can recognise them in Gombrich and their names sound familiar.
Maybe because we have done this, he will feel like they are already old friends when we do start actually teaching him about them. Maybe. Maybe not. I am ok with that.

I think the only way in which this can be useful is more as an expression of our family culture. Patapon is the son of two history geeks, who frequently talk about the ins and outs of Napoléon's career or the role of Talleyrand at the Congress of Vienna as chit-chat during dinner. He will be free to reject this as he grows more aware of what he likes, but right now, we're just going to be happy history geeks together. Because that's what we do.

Besides he's never watched a single episode of Thomas the Tank Engine in his life. As far as he is concerned, "Tomash" is his friend "Ovil"'s daddy, who taught her how to recognise Hera and Apollo, and whose tome on Shakespeare he likes to use as a construction block.

Geeks, you know. There are more of us than you know.
Posted by Isabelle at 13:20